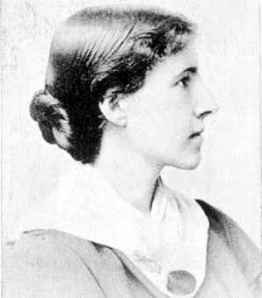 Charlotte Perkins Gilman was born July 3rd 1860 in Hartford, Connecticut. She had a somewhat difficult childhood that then followed her into her adult life. Much of her struggle could be seen throughout her work.  A great example of this would be her short story, “The Yellow Wallpaper”.  The story focuses around a women who moves into a house with her husband with a strict prescription of rest cure. The story was pulled from Gilmas real life experience with her doctor, S. Weir Mitchell, who was Philadelphia neurologist.  He , like the husband John in the short story, required her to stay in bed for long periods of time. She was not to write and as put into total isolation. In “The Yellow Wallpaper”, the narrator described the wallpaper as,

“Then in the very bright spots she keeps still, and in the very shady spots she just takes hold of the bars and shakes them hard. And she is all the time trying to climb through. But nobody could climb through that pattern—it strangles so; I think that is why it has so many heads. They get through, and then the pattern strangles them off and turns them upside down, and makes their eyes white! If those heads were covered or taken off it would not be half so bad” (Gilman 272).

The pattern symbolizes not only the rest cure, implemented by men, but also all the expectations women of the 19th century were supposed to live up to. If they tried to escape that pattern they would lose everything, their family, reputation and respect. The narrator in the story soon figures out the pattern in the wallpaper and begins to identify herself as the women behind it.

“I suppose I shall have to get back behind the pattern when it come night, and that is hard! It is so pleasant to be out in this great room and creep around as I please” (Gilman 274)

The women in the story lost her head, in a way, by getting completely wrapped up in the wallpaper and going crazy.  Gilman on the other hand left both her husband and Mitchell and got revenge on Mitchell by writing “The Yellow Wallpaper”.  She wrote the story to reveal the ineffectiveness of Mitchell’s practices. Gilman soon got recognized as a feminist activist, a title she declined to call herself. She traveled around lecturing women about equality and independence. Other examples Gilman’s work that challenged the idea of the women were Women and Economics, Concerning Children, The Home: It’s Work and Influence and Human Work.

To get the sense of the dark times both Gilman and the narrator went through, attached is PBS Masterpiece Theater’s 1989 adaption of “The Yellow Wallpaper”.