A Gift From Somewhere by Ama Ata Aidoo is about this women, Mami Fanti, who has lost three children and was on the verge of losing her fourth child. Her fourth child has a weak heart and lacks nourishment. Occasionally, a religious man, known as Mallam  would come by the village and “perform miracles”.  Mallam tells Mami Fanti that her  son will actually live. However, once Mallam sees how sick the boy actually is, runs away before he could be blamed for the boy’s death. A miracle does happen and the boy does end up surviving and the mother continues to keep doing what Mallam had told her to do. Unfortunately, they live with an abusive father who does not seem to like anything that Mami does for the boy, but she is dependent on him. Usually Mami does not step in when the father is beating or when he disciplines the child: “I had made up my mind never to interfere in any manner he chose to punish the children, for after all, they are his too” (851), but this particular time she felt that “he was going too far” (851). She rushes in and saves her son, Nyamekye, and receives a vicious blow.  Mami Fanti is happy after this because she had saved Nyamekye and his life was a gift to her. 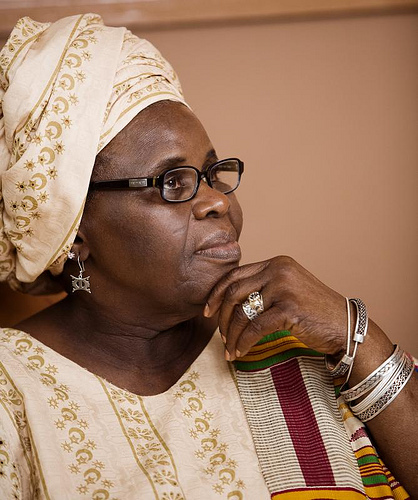 The title of the story, I think says it all, “A Gift From Somewhere”, implying that the gift of life, regardless of where it came from, all that matters is that it is there. I think Aidoo wanted to leave the readers with the feeling that we should not take anything for granted, and reminds us how precious life is.

Fun Fact: Ama Ata Aidoo has a twitter. Link below.