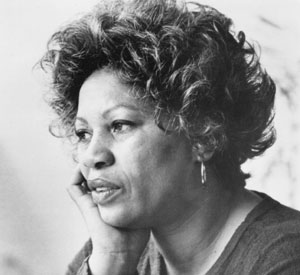 Tony Morrison’s “Recitatif” is a short story about two young girls, Twyla and Roberta, and their interactions throughout their entire lives.  We know one of the girls is black and one of them is white but Morrison never tells us exactly which one is which so we are never entirely sure.  All we know is that the girls are of different class structures.  The girls never display any clear stereotypical characteristics of each race but have characteristics that could be each race.  Morrison does at great job at removing the racial codes from this story, leaving the reader to guess what the race of each girl is.

I found that at the end of the story I did not know of what race Twyla and Roberta were.  I had no idea throughout any of the book.  I couldn’t give an exact race to either one because there just wasn’t enough evidence in the story for me to do that.  There was one section that made me think Twyla was black, and it was on page 1228 in our anthologies.  It read:

“Mary, simple-minded as ever, grinned and tried to yank her hand out of the pocket with the tragedy lining- to shake hands, I guess.  Roberta’s mother looked down at me and then looked down at Mary too.  She didn’t say anything, just grabbed Roberta with her Bible-free hand and stepped out of line, walking quickly to the rear of it” (1228).

This section made me think that Twyla and her mother were black, because Roberta’s mother wouldn’t shake Mary’s hand at all and back in the 50s when this took place, it was stereotypical of a white person to not want to touch or associate with a black person.  But then I started to think that if Roberta’s mother was an upperclass black woman and saw Twyla’s mother as a lower class white hussy, she may still not want to shake her hand.  Morrison does this throughout the entire story, where you think that one girl could be one race but you are never exactly sure.

I think Morrison does this to prove a point that we are all equal.  In the story we know one girl is white and one is black but we are never sure which one is which because Morrison never comes out and says it.  By removing the racial code from the story, it helps to prove that we are all equal and that you can’t judge a person based on their race.  Also by removing stereotypes and putting the girls in similar life situations Morrison continues to prove a point that we are equal and anyone could be any race.

This book was enlightening and really made me think.  A lot of Toni Morrison’s writing does that for me.  Down below is a link to a YouTube video where she talks about her motivation for writing.

One thought on ““Recitatif”-Ignoring Black and White Stereotypes”