In Helene Cixous’s work, “The Laugh of the Medusa,” she writes, “Write, let no one hold you back, let nothing stop you: not man; no the imbecilic capitalist machinery, in which publishing houses are the crafty, obsequious relayers of imperatives handed down by an economy that works against us and off our backs; and not yourself” (392). 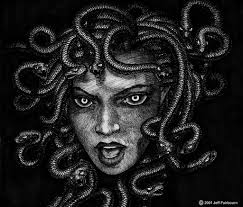 To me, this quote was meant for all women.  Women should not let anyone hold them back.  And the part that I found especially significant was for women not to hold themselves back.  Cixous grew up reading male texts, where there were few women writers to look up to (390).  Cixous is encouraging women to write because it allows them to explore female empowerment.

I can see why men would discourage women to write; why would men want women to feel empowered?  Men probably would like women to remain inferior, or at least would like them to “think” they are inferior, so they stay in power.

In the clip below, Cixous comes right out and says that a great mind is universal; it doesn’t matter if it is a man or woman.  There was even a list put out of “intellectuals” that would most likely lead the 21st century and no women were on the list.  And this was in 1992!

As the interview continues, we see that Cixous starts to discuss the strategy of silence, writing, and phallocentrism.  I really enjoy that Cixous is hesitant to use phallocentrism as a part of her strategies because she doesn’t want to ridicule men, but instead wants to give women the opportunity to rise from the silence.

This reminded me when Woolf said that she enjoyed Charlotte Bronte’s work, but thought that Jane Austen was great.  Bronte mocked men in her work, while Austen totally ignored the problem with men and their writings, and wrote what she wanted to write about; Austen wasn’t bogged down with hatred for men, which Woolf liked, and Cixous may have enjoyed also.

It is important for women to not hold back, not only because it gives other women the opportunity to have a female role model, but it allows women to stick together and show men that their should be equality between sexes.

At the end of “The Laugh of the Medusa,” Cixous concludes her essay by saying, “When I write, it’s everything that we don’t know we can be that is written out of me, without exclusions, without stipulation…In one another we will never be lacking” (405).  This teaches us (women) that when we all say what we need/want to say, we will never be absent from society.  Or, in other words, we will never be seen by men, as lacking in intellectualism. “Women must write her self: must write about women and bring women to writing, from which they have been driven away as violently as from their bodies – for the same reasons, by the same law, with the same fatal goal. Woman must put herself into the text – as into the world and into history – by her own movement” (391). Helene Cixous’s strong feminist philosophy helped to bring justice and equality to the world of feminine literature. Cixous was not afraid to break the barrier between what was appropriate and what was not, focusing solely on bringing to light the unfair and oppressive treatment toward women who wished to express themselves through writing. The woman’s body and intelligence was meant to be celebrated and exposed, not hidden and shamed. It is obvious in her work titled, “The Laugh of Medusa” that Cixous was very adamant about liberating the “New Woman” and moving beyond the “Old”. In order to break out of the shell that had encompassed women for years, female writers could not accept the barriers that had been placed on them and could not be afraid of the consequences and back-lash that might have occurred after their writing was read by the public.

Here is a video clip from the NYS Writers Institute in 2007:

“When I don’t write, I sleep, and when I sleep, I dream, and when I dream, I write.”  While speaking to the students and other faculty at the State University of New York, Cixous goes through her journey as a writer and how her everyday life was shaped around her fascination with writing.  Cixous mentions how writing is a journey, and the journey that she talks about is exactly the type of advancements that she explains in “The Laugh of the Medusa”.  In her essay, she writes, “ We’ve been turned away from our bodies, shamefully taught to ignore them, to strike them with that stupid sexual modesty; we’ve been made victims of the old fool’s game: each one will love the other sex” (399).  For decades, women have felt that their bodies were something to be ashamed of and that any expression of their sexuality was deemed embarrassing and adulterous.  Cirxous strongly encouraged the celebration of the female body and the livelihood that it brought to women.

Cixous served as an important role model for many contemporary women poets, especially for those who were dying for an answer to their problem; dying for a light to show them the way to a successful and meaningful career.  Audre Lorde, in particular, was one poet whose ideals were very similar to those of Cixous.  In her poem, she writes:

high wind in her forest’s hollow

honey flowed    from the split cup

impaled on a lance of tongues

on the tips of her breasts    on her navel

and my breath    howling in her entrances

Hélène Cixous was born June 5th 1937 in Oran, French Algeria.  She produced several pieces of literature through out her life but her piece titled “The Laugh of the Medusa” was her most influential piece.  It was translated to English and released in 1976.  The text focused on the embodiment of women. Cixous wrote,

“And why don’t you write? Write! Writing is for you, you are for you; your body is yours, take it. I know why you haven’t written. (And why I didn’t write before the age of twenty-seven.) Because writing is at once too high, too great for you, it’s reserved for the great-that is, for “great men”; and it’s silly”

Here she is challenging women to not be afraid to write.  Telling them to go against what there past says; which is that men were the only great writers, and write. Do not stay hidden in the shadows simply because you do not see your self-adequate.

This essay is full of how women were oppressed and how Cixous, in a way, is trying to build them up. Give them courage to fight for there womanhood.  An example of this is,“We the precocious, we the repressed of culture, our lovely mouths gagged with pollen…we are black and we are beautiful.”

Also a large part of this essay is talking about a woman’s body. Cixous repeats the phrase “write for your body” a few times. She says that men are more or less “coaxed” into being successful or adequate, by societies standards, but it is the women who are seen as the “body” or the one to birth babies. Women were supposed to take care of the home and the family; not write. So Cixous is saying, write the story that has not been told; let your body speak.

“Those who have turned their tongues 10,000 times seven times before not speaking are either dead form it or more familiar with their tongues and their mouths than anyone else. Now, I-women am going to blow up the Law: an explosion henceforth possible and ineluctable; let it be done, right now, in language.”

“There’s no room for her if she’s not a he. If she’s a her-she, it’s in order to smash everything, to shatter the framework of institutions, to blow up the law, to break up the “truth” with laughter.” 1 “That’s because they need femininity to be associated with death” 2 “Consumed, as Freud and his followers note, by a fear of being a woman” 3